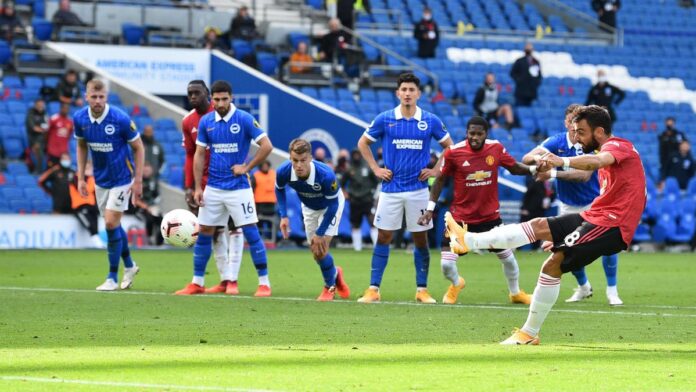 15th in 2018, 17th in 2019, and 15th in the Premier League in 2020, Brighton and Hove Albion are a team destined to play maintenance every season. Two draws and a victory the previous year during the last 3 days had allowed the formation of Graham Potter to save themselves. 12th for the moment this season, Brighton, not really spared by the calendar is doing very well and showing very good things in the game. Defeated by Chelsea in the opening (1-3), the partners of Neal Maupay are then imposed on the lawn of St James Park in Newcastle (3-0). Determining and collective, the Seagulls made Man United tremble last Saturday, but following March’s equalizer in the last minutes of the match (2-2), the referee whistled a penalty in favor of the Reds when he had whistled the end of the match beforehand. A cruel outcome for Brighton which will bow after Bruno Fernandes transforms the sentence (3-2).

Excellent during the second part of the season, Manchester United in particular performed very well in the home stretch to take 3rd place in the Premier League and join the semi-finals of the Europa League (lost against Sevilla FC). Qualified for the Champions League, the formation of Manchester however got off to a bad start in their championship with a surprise defeat against the Crystal Palace of Wilfried Zaha, determining in this meeting (1-3). Following this defeat, the Mancuniens hardly beat Brighton last weekend (3-2). A worrying start, because so far, United have only met contenders for maintenance.

The workforce for Brighton vs Manchester United

For Brighton, goalkeeper No. 2 Walton and usually substitute strikers Izquierdo and Andone is injured. Suspended last weekend, Yves Bissouma (ex-Lille) will be back against Man United. During the offseason, the team was forced to let go of substitute defender Shane Duffy (Celtic), important midfielder Aaron Mooy (Shanghai SIPG), and side Martin Montoya (ex-Barça). The club has been clever to compensate for these absences since it has enlisted at a lower cost the Dutch defender, often injured with Ajax lately, Joel Veltman (28), and the experienced attacking midfielder of Liverpool, also in prey to injuries, Adam Lallana (32). Rather daring bets. With two goals against Newcastle and one against United, Neal Maupay is the team’s top scorer with 3 goals.

Jones and Tuanzebe are the only players injured on United’s side. There are no major starts to report so far and van de Beek (Ajax) has come to strengthen Manchester’s midfield in the offseason. Back in his squad after a great year with Sheffield United, Deen Henderson is De Gea’s understudy this season. Expected like every season across the Channel to go one step further, Marcus Rashford scored an exceptional goal against Brighton last week, his first of the season in the league.

Coming up after this whistled penalty after the end of the match, this Brighton team will want to take revenge in the EFL Cup. Brighton does not lose!