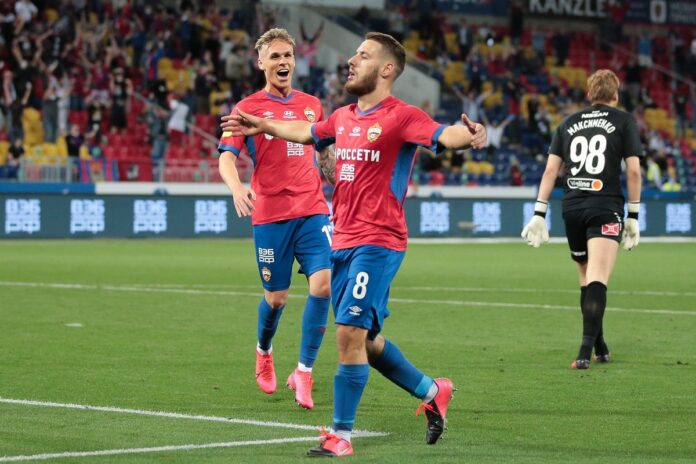 This Saturday, CSKA Moscow receives Tambov on the occasion of the 2nd day of the Russian championship. CSKA wants to confirm they’re good 1st match. Tambov hopes to bring back a positive result from this perilous move.

On July 22, CSKA Moscow closed a rather disappointing championship which finished 4th in the standings. Completely out of the race for the title (22 units behind the leader), which has eluded them since 2016, the men of the capital have however narrowly missed the qualification for the preliminary rounds of the Champions League (2 points behind the 3rd). Defeated only once in the last 7 days, for 4 wins and 2 draws, they showed great things in July. Last weekend, CSKA got off to a perfect start to this new year by gleaning a precious victory in Khimki (0-2).
Promoted to the elite last year with the lowest budget in the championship, Tambov has managed to keep his place in the elite. Despite a very complicated recovery after confinement (6 defeats and 2 wins), the team finished 14th in the standings, with the same number of points as the 15th, 1st relegation. Last weekend, Tambov lost, at home, against Rostov on the first day of this 2020/2021 season (0-1).

The workforce for CSKA Moscow vs FC Tambov

CSKA Moscow has to deal with the withdrawal of important midfielder Ilzat Akhmetov. For this new season, the leaders have set their sights on the promising Argentine striker Gaich, who started on the bench on day 1. Dzagoev’s point guard has found the net against Khimki and he should again be positioned in support of striker Chalov.
For Tambov, the important winger Melkadze is suspended for this meeting. The 2 top scorers of the club last season Kostyukov and Obukhov, 7 goals each, are, for their part, well available.

Key points for the match CSKA Moscow vs FC Tambov

Coaches have the possibility of making 5 substitutions during the game.
The match will take place with a limited number of spectators.
In Russia, the 2019/2020 championship ended on July 22.

CSKA Moscow should not miss the opportunity to pocket 3 points against a formation of Tambov within reach. Victory CSKA Moscow!