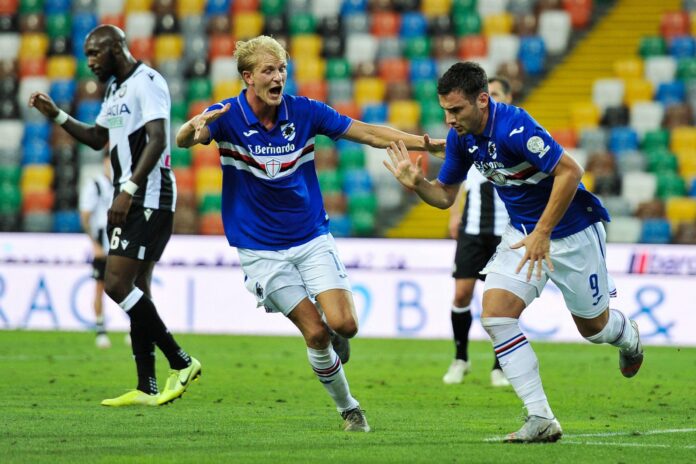 Wednesday evening, Sampdoria receives Cagliari for a meeting of the 33rd day of Serie A. Sampdoria must ensure its maintenance as quickly as possible while Cagliari is out of danger.

Unconvincing this season, the Sampdoria is recovering colors and seems on the right track to obtain a more comfortable support than expected. Indeed, the Genoese club has rebounded well after a complicated recovery marked by 3 defeats. After beating Spal (3-0) and Lecce (2-1), Claudio Ranieiri’s men were unable to face Atalanta (0-2). But last weekend, they reacted well by winning in front of Udinese (1-3).
For his part, Cagliari has already secured his grip and is now playing for a place in the top 10 of this Italian championship. Currently, the Sardinian team is in 11th position in this Serie A but struggling to find new life for some time since it has taken only 3 points in its last 4 games. Held in check by Bologna (1-1), she was beaten by Atalanta (0-1) before sharing the points again against Fiorentina (0-0) and Lecce (0-0).

The staff for Sampdoria vs Cagliari

For the Samp, the important members of the rear guard Ferrari and Tonelli and the middle holder Vieira remain out of shape. Less in sight than last season, veteran Fabio Quagliarella still scored his 10th goal of the season last weekend.
On the Cagliari side, long-time absent Pavoletti, substitute Oliv and defenseman Pellegrini will not make the trip. Offensively, attackers Simeone (10 league goals) and Joao Pedro (17 goals) form a terrible duo.

Key points for the match Sampdoria vs Cagliari

Cagliari has won 2 times against Samp ‘this season. In the championship (4-3) then in the Cup (2-1) 3 days apart in December.
Coaches can make 5 replacements during the game.
This meeting will take place behind closed doors.

Subscribed to the draw for some time, Cagliari could come and get a point on the field of Samp. Our betting recommendation is Draw!