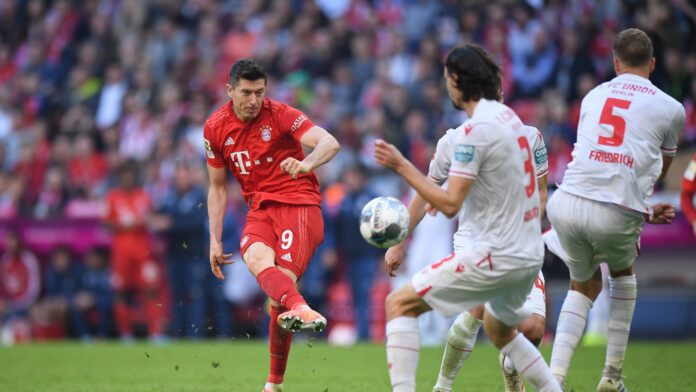 Union Berlin will host Bayern Munich on Sunday 17 May on behalf of the 26th day of the Bundesliga. Union Berlin wants to take points to ensure its maintenance as quickly as Bayern is looking for a new title.

For its first time in the elite of German football, the Union Berlin fully meets the expectations of observers. The second club in the capital occupies the 11th place in the ranking and has 8 good lengths ahead of the first relegation which allows it to see it coming. However, the partners of the former Stéphanois Subotic must recover. After defeating Eintracht Frankfurt (1-2), they held Wolfsburg (2-2) in check before losing twice against Bayer Leverkusen in the Cup (3-1) and then against Friborg (3-1) during from the last day.
Opposite, Bayern Munich has resumed its rights across the Rhine and is still at the top of the classification with 4 steps ahead of its first pursuer, Borussia Dortmund. Very fit, the reigning champions still play on 3 tables. Well on their way to qualifying for the Champions League quarter-final after winning their 1 / 8th final first leg against Chelsea (0-3), they also qualified for the semi-finals of the German Cup by dominating Schalke 04 (0-1). Finally, in the championship, they won their last 3 games against Paderborn (3-2), Hoffenheim (0-6) and Augsburg (2-0) just before the suspension of the championship.

The staff for Union Berlin vs Bayern Munich

The Berliners could find their substitutes Mees, Schmiedbach, Dehl and Gogia, absent before the break, while the defender Friedrich is suspended after having been excluded in the last meeting. Despite the defeat against Friborg, the Swede Andersson scored his 11th goal of the season.
For its part, Bayern can once again count on its top scorer Lewandowski and on the French international Coman. On the other hand, the important Süle and Perisic are still stranded in the infirmary.

Key points for the match Union Berlin vs Bayern Munich

Bayern had just won in the first leg (2-1).
The match will be played behind closed doors.

Largely superior in every way on paper, Bayern Munich should undoubtedly get rid of those promoted on Sunday.