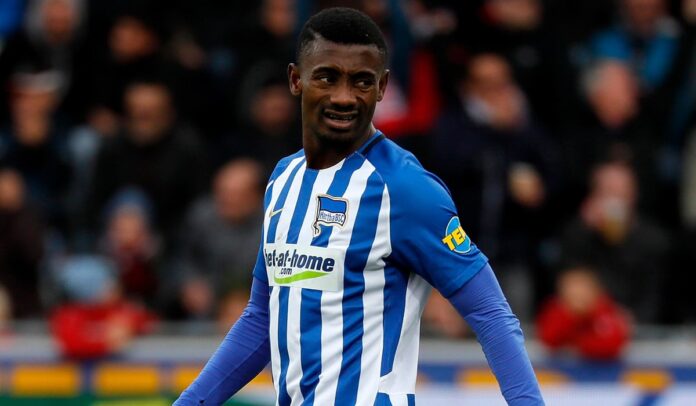 These pictures are explosive: Salomon Kalou films in the booth of Hertha BSC. Despite Corona, there are obviously no strict rules on distance. The DFL is horrified. The club suspends the player. The incident offers football opponents many arguments.

Handshake with colleagues, not a big gap in the Corona test and then also nuisance about the salaries cut due to the pandemic: According to his sensational Facebook video, Salomon Kalou was suspended by Hertha BSC on Monday evening.

The damage caused by the explosive Berlin Facebook clip is not yet in sight for the Bundesliga, which is struggling to continue the season, shortly before the probably decisive meeting of the Federal Government on Wednesday.

“Salomon Kalou not only caused a lot of damage to Hertha BSC with his video, but especially in the current social discussion about the resumption of gaming and the role of professional football, the impression is given that individual players do not take the Corona issue seriously,” said Hertha manager Michael Preetz in a message from the club.

The German Football League also reacted horrified by the pictures from the capital. “The pictures of Salomon Kalou from the Hertha BSC cabin are absolutely unacceptable. There can be no tolerance for this – also with regard to players and clubs who adhere to the guidelines because they have grasped the seriousness of the situation, ”tweeted the professional umbrella organization.

With his 25-minute film, the Ivorian had not only given unusual insights into the training processes at Hertha BSC, but also documented clear violations of the strict hygiene regulations for the Bundesliga soccer team. Hertha admitted “that the regular information on the distance and hygiene rules must be even more intensive.”

Among other things, the footage of the 34-year-old attacking player shows how his teammate Jordan Torunarigha, who was visibly surprised by the camera situation, took a sample for a corona test. Kalou is in the same room and replies to the test taker’s request to delete the video: “I’m just kidding.” Before that, he had started a wild “corona singing”.

In the Hertha message, Kalou apologized. “I am sorry if my behavior gave the impression that I am not taking Corona seriously,” he was quoted as saying. “I didn’t really think and was happy that our tests were all negative,” he said.

Kalou also filmed conversations in the locker room with teammate Vedad Ibisevic, among others. Throughout the entire video sequence, Kalou repeatedly shakes hands with fellow players or club employees. The concept of the “Task Force Sports Medicine / Special Game Operations” of the DFL states, among other things, that training operations in common rooms must be at least two meters apart and that players should change, if possible, at home. Hertha BSC announced on Sunday that all corona tests have so far been negative.

The cabin talks by the Hertha professionals also deal with the salary payments, which were obviously lower than those agreed with the club due to the Corona crisis. Kalou waves the paycheck at the camera.

The video shows how Kalou initially places his smartphone on the bench and sits next to Ibisevic. Both talk about the Hertha professionals’ waiver. “Why are you lying to us? Maybe it’s a mistake on purpose. If you do this with every player, you will make a lot of money, ”says Ibisevic in English. Teammate Per Skjelbred says: “Yes, 3000 here, 5000, 3000 there.”

Ibisevic continues: “They are crazy, brother. I don’t fucking understand why they’re doing this. We should talk to Arne. He ran around with the papers and said, ‘Sign here’. “By“ Arne ”the Bosnian probably means performance manager and ex-international Arne Friedrich.

“The discussion about the waiver of partial salaries among license players at Hertha BSC arose from incorrect accounting. These have now been corrected, ”said von Hertha. The impression created by the film that the players are angry is to be revised: “The basic measure was discussed with everyone in open-ended coordination talks and was supported by all players. There were no critical voices there. On the contrary, everyone welcomed this measure. ”

It is not clear whether Kalou’s colleagues like Ibisevic know that they are being filmed. “I would also like to apologize to those shown in the video who did not know that I was broadcasting live and who I did not want to put in such a situation,” said Kalou.

Kalou had begun his admission with the trip to the training area through Berlin and also remembered the triumph in the Champions League with Chelsea in 2012 against Bayern. The Ivorian has been playing in Berlin since 2014. He had been sorted out by ex-coach Jürgen Klinsmann this season. There was no transfer to another club. Under coach Bruno Labbadia, he took part in the training again – but only until his video recording.

Transfer market at the time of the virus, all possible changes