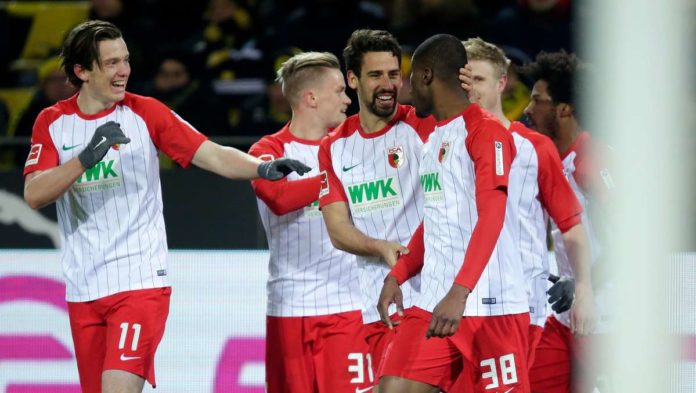 On Saturday, Augsburg welcomes Werder Bremen on behalf of the 20th day of the Bundesliga. Augsburg wants to go back to the 1st part of the classification while the Werder fights not to go down.

After having had an excellent series of 6 undefeated matches, including 5 successes between November and December, Augsburg saw its golden period come to an abrupt end. At the end of December, the club was logically beaten by Leipzig (3-1) before conceding a new defeat against Dortmung (3-5) after the truce. Finally, last week, teammates of Stephan Lichtsteiner chained a 3rd loss against the Union Berlin (2-0) and fell to 12th place in the standings with still 6 points more than the 1st relegation.
For its part, Werder Bremen is in great danger. Florian Kohfeldt’s men have accumulated poor performances and have just lost 7 times in the last 9 days of this Bundesliga. Largely beaten by Bayern Munich (5-1), Mainz (0-5) then by Cologne (1-0) before the break, they thought they had found a little going by winning in DÛsseldorf (0-1) . But last week, they relapsed at home against Hoffenheim (0-3) and remain barrageurs of this championship.

The staff for Augsburg vs Werder Bremen

The little used Schieber, Oxford and Cordova are absent on the Augsburg side. On the other hand, the returns of Framberger and Jensen are hoped. With 10 goals, Florian Niederlechner is the spearhead of the club’s attack.
Werder Bremen still records the packages of executives Augustinsson, Gebre Selassie, Lang, Fullkrug and Mohwald and of replacement Barfrede, all in the infirmary. However, defender Moisander is expected to return to what remains the Bundesliga’s worst defense.

In the first leg, Werder won in front of his supporters (3-2).
There have been at least 3 goals in 7 of the last 8 Augsburg games and 11 of the last 13 Werder games.

In the obligation to react after his last defeats, Augsburg could take advantage of receiving one of the worst teams in the championship to return to success.